My daughter had a birthday a few weeks ago. This being her first birthday away from home, I was determined that she have some kind of birthday cake.

While she attended a private school from kindergarten through fifth grade, for her birthday party, I used to get pizza for her classmates for lunch. So, after trying to figure out what kind of cake I could make and send to her, I came up with the idea of the deep dish pizza.

I wanted to have the crust higher on the side with a space in the middle for the ingredients. I could have carved out the middle, but wait! After looking through my baking pans, I found the flan pan! So, I baked one layer in the flan pan, the second layer in a 10 inch round pan, as that is the size of my flan pan. 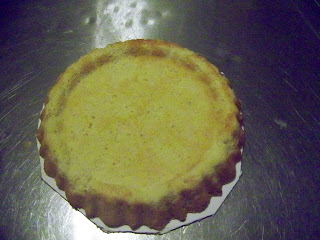 I iced the round layer with buttercream, placed the flan piece on top. I placed it in the freezer for easier carving.  The next day, I took it out of the freezer, and carved the flan edges to make them rounder. 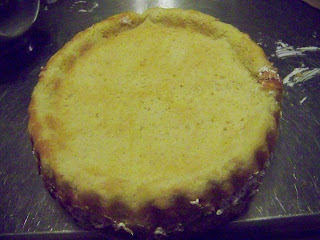 After the carving, I covered the cake in a buttercream crumb coat. 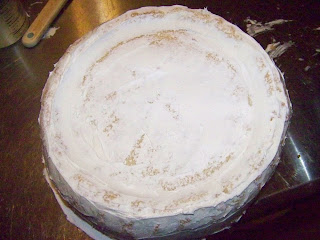 Since the cake was going to be mailed, I had to make it as indestructable as possible. I chose to cover the outside of the cake with white fondant. I painted the fondant using gel colors. I used a brown and yellow gel colors, as that is all I had.  I covered the middle of the cake with a red buttercream for the sauce. Since my daughter's favorite pizza is black olive and cheese, I needed to find a way to make the black olives.  I rolled out black fondant, and used the end of my decorating tips to cut out the olives.  I let them dry before placing on the cake.
For the cheese, I grated white fondant using a cheese grater.  I needed the fondant first, found that if the pieces were cooler, they grated better.  I assembled the ingredients on the top as you would for a pizza. 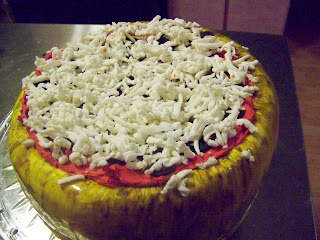 Here is my finished product. Not bad for the first time!  I then wrapped the cake in plastic wrap.  To mail it, I cut cardboard to fit around the edges. I also put multiple layers of cardboard on the top and bottom, as the cake turned out very heavy.  I had used a pound cake recipe, so the cake would be sturdy enough for the trip.  The cake fit in a large flat rate priority box, which saved on postage.

The cake made the trip intact!  In fact, the cake ended up traveling back and forth multiple times!  My daughter new I would be missing her on her first birthday away from home, so her boyfriend picked her up from school, and brought her home.  The cake came with her.  Since there was still plenty left by the time she needed to go back to school, I had her take the cake back with her.

Moral of the story- you can send a cake through the mail, it can make it in one piece and on time!
Posted by Laura at 11:23 AM

Laura
I started baking as a child. I had an aunt who was into baking and cake decorating, I would go over to her house and watch, sometimes being lucky enough to assist. When I was 18 and needed Christmas presents for the family, not having any money, I turned to baking cookies. Took my first Wilton decorating course about 35 years ago. When my kids were young, I would make and decorate their cakes. I would get lost for hours while decorating, it was a way for me to show my artistic side. Now, many years later, I still enjoy baking.