It has now been four weeks since my surgery, I am amazed at how well things are going! The hardest part of the recovery is being still while the tendon heals. I can semi-sit on my right side, can walk using crutches with a peg leg. Now that it has been four weeks, I can also start bending my left leg, making it much easier to sleep.

So, what have I been doing for the past four weeks? The first two weeks, I basically spent lying down and watching TV and sleeping. I had my first post op visit after two weeks, and have gradually been trying to do some things to build up my stamina. I'm not normally a big TV watcher, and found that after two weeks, a lot of what I like to watch is reruns.

Lsat week I mixed a batch of chocolate chip cookies from a recipe which I received at betterbaking.com. It makes a big batch of cookies, which can be frozen for later use. I use a small
disher (like an ice cream scoop) and placed the dough on the cookie sheet, then placed them in the freezer. My goal was then to place the pieces of frozen dough in the freezer, that way if you wanted just a few cookies, you did not have to make a big batch. Before I could do that, my daughter baked them up for the concession stand for a game at school. Guess I need to mix another batch!

I have decided I want to branch out my baking skills, so I bought the book
Feedback | Help | Expanded View | Close 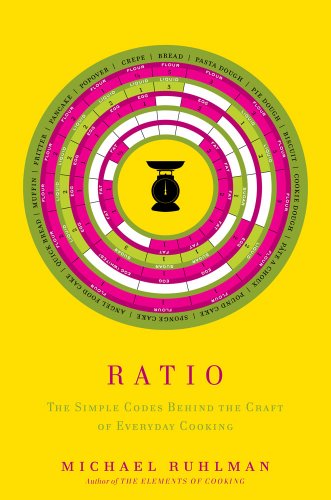 Ratio: The Simple Codes Behind the Craft of E… (Hardcover)
by Michael Ruhlman

It describes the ways we can use ratios in our baking and cooking to come up with our own recipes. So far, the book has been very imformative. One of my weakest cooking points is using sauces, so I want to branch out into making those.

I enjoy sewing, and have decided to learn pattern making. For Christmas I made many pairs of flannel pants, and branched out at that time to changing the patterns for what I wanted. Great fun for me!

I found a quilt I had started working on about 10 years ago, and now I am going to work on finishing it. I have about 1/2 of the quilt blocks made. Hopefully I will get it finished soon.

Haven't been able to do much baking, due to inability to stand as long as I need to. Since I need to use crutches, it is difficult to get all the ingredients I need easily. I did make up batches of bread dough for the soft whote, caraway rye, and brioche dough from the artisan bread in five book. Baked a couple of loaves, tonight I am thinking of making beignets from the brioche dough.

So, for now I will continue to progress slowly as I should be, being gentle with myself and my new tendon.
Posted by Laura at 11:41 AM

Laura
I started baking as a child. I had an aunt who was into baking and cake decorating, I would go over to her house and watch, sometimes being lucky enough to assist. When I was 18 and needed Christmas presents for the family, not having any money, I turned to baking cookies. Took my first Wilton decorating course about 35 years ago. When my kids were young, I would make and decorate their cakes. I would get lost for hours while decorating, it was a way for me to show my artistic side. Now, many years later, I still enjoy baking.